I was nearly 6 months old when I had my first taste of whisky. Friends who know me won’t find it difficult to believe that I was a tiresome, colicky baby. In the hopes of a full night’s sleep my brand new parents gave me a sip of Tesco’s finest. The opposite of what they intended happened; instead of lulling me into a full night’s sleep the whisky had me in a fit of giggles. All night.

I didn’t return to whisky for a long time after that. Even five years ago, whisky would inspire one of three memories – my father drinking Johnnie Walker Black Label, loud Punjabis drinking copious amounts of Patiala pegs at weddings, and Sean Connery. I’m not sure what changed, when, or why, but almost the same time that I moved to London I began to enjoy whisky more and more. The Manhattan has been a favourite cocktail for a long time, and many would argue that this is a natural progression for the curious. Several years, many whisky mistakes, and lovely Twitter friends later I was introduced to London’s Whisky Squad.

It is one thing to be swanning about town on my Tables for ONE… quite another to be a new, single woman testing out a whisky tasting club. Even as I signed up for an extremely affordable Smoking Section session (£15 for a tasting of 6 whiskies plus you get to help yourself to any leftovers after the tasting), I was very apprehensive about how the tasting session would turn out. 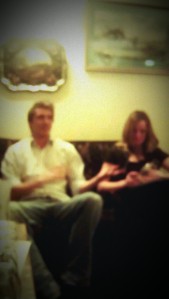 It took less than five minutes with the group to realise I had nothing to worry about. I couldn’t put the group in a box if I tried. There were Jason and Andy who started the Whisky Squad – lovely, friendly and down-to-earth; Dave the reluctant expert who works in IT but could guess the ABV (alcohol by volume) to the nearest .3%; Peter who’s father started a malt whisky distillery; Adele, the beautiful blonde who was happier drinking the whisky than trying to guess its age; Rob, the young Oxford University dropout who has built himself a stellar career at Berry Bros… The one thing that bound this room full of strangers together was an uninhibited joy of tasting whisky.

The session is informal, great fun and unpretentious. We blind tasted six whiskies, discussed nose and palate, and did an embarrassingly bad job of guessing the age, ABV and price of each as we went along. Here is what we shared:

Whisky #1
Popular opinion: Smells like piglets (not pigs) swimming in vinegar
The real deal: A limited edition  Bruichladdich Octomore 4.1 for £87

Whisky #2
Popular opinion: A pointless whisky that disappeared without leaving anything behind
The real deal: A very young Benromach Peat Smoke for £31.95

Whisky #3
Popular opinion: Smells of hospitals and mattresses (maybe even hospital mattresses) but the palate was a clear favourite with the group
The real deal: The 25yr old  Port Askaig for £99.95

Whisky #4
Popular opinion: If there ever was a Charming Chav, this is he
The real deal: The only non-Scottish whisky of the night from The English Whisky Company,  St George’s Distillery Chapter 11 Cask Strength for £67.49

Whisky #5
Popular opinion: Smoky, burnt wood. It reminded me of the angeethis in Srinagar during the winter of 1989.
The real deal: My personal favourite of the evening, Elements of Islay Kh1 for £49.95 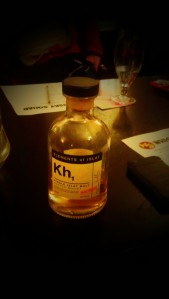 Whisky #6
By this time the bonhomie among the group outshone any hopes of the prescribed analysis for Whisky #6. I remember a discussion of space dust vs. moon dust but couldn’t be sure :). The last whisky was the Kilchoman 100% Islay Inaugural Release for £69.

My favourite takeaway from the evening was courtesy Dave. He said, “There is no such thing as a wrong answer. It’s just not as right as you could be. Yet.”