Bengal in Bandra. A food walk

I grew up in Hyderabad but all my meals came out of a Punjabi kitchen. The few exceptions were Sunday morning breakfasts of dosa at Hotel Harsha, sweet corn chicken soup at Hi-King, post-swim sandwiches at Hotel Banjara, and Maggi Noodles. I had such a Punjabi palate that meals at Mamma’s Bombay Sindhi kitchen were just painful. (You still can’t get me to eat sai bhaaji or sindhi curry.)

Kaali daal, sarson da saag and mountains of paneer aside, I was raised with a timid palate. It wasn’t until several years later when I had my first Hyderabadi biryani in Bombay that I realised what a food wonderland I had left behind. And it wasn’t until I left India that I really appreciated what a fantastic food heritage I came from. Now when I go back home I would rather eat Maggi Noodles than at the latest “Continental” restaurant.

Last week I hit the jackpot. One of India’s favourite food bloggers (and an excellent chef), Kalyan Karmakar was hosting a Bengal in Bandra food walk and I managed to bag a last minute spot.

The sweltering evening began with Kalyan introducing the spirit of the walk. He was going to guide us through some of his favourite Bengali dishes available in Bombay, and share stories about where they came from, how he would eat them back in Bengal, and the compromises he makes in his new home. (No there were no puchkas in our luck as Kalyan assured us we would not find even remotely authentic ones outside Calcutta.) He couldn’t have had a more ravenous dozen hanging on to his every word.

We began at Hangla’s (which is Bong slang for “greedy for food”); a street stall on Bandra’s throbbing Turner Road with chefs from Calcutta handpicked by the owner. We ate egg and mutton rolls (my favourite), fish chops (delicious with kasundi (mustard chutney)), veg cutlets, and Calcutta biryani. Our group had a healthy mix of Frankie-loving Bombayites and kathi roll enthusiasts and Kalyan played a (very) biased referee while explaining the differences between the two.

As we made our way through a bustling Bandra to the next stop, Kalyan regaled us with Bong food stories and tips – about not using ketchup except in egg rolls; about how the Brits caused the biryani to travel from Awadh to Calcutta (losing some meat and gaining eggs and potatoes on the way); and how dessert isn’t strictly a post-meal indulgence.

In true Bengali style, we next marched into Sweet Bengal between our appetisers and mains. Until today I had never ventured beyond Bengali classics sondesh, rossogolla and mishti doi. Kalyan’s picks were a revelation! My favourite was kheer kodom – a juicy rossogulla enveloped by delicious khoya. I paid little attention to the pantua vs. gulab jamun debate as was completely distracted by the kalo jaam, dorbesh, gurer sandesh and excellent kachoris. 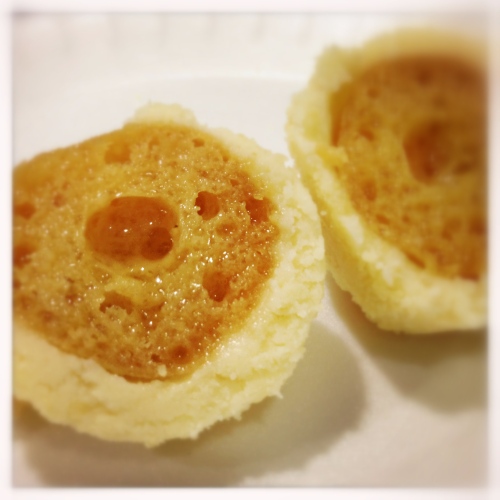 Not being trained to eat sweets whenever it suits our fancy, the non Bengalis in the group struggled to keep up with the rest. We moved on to the third stop, hoping that the walk will help make room for the final dot on our food map tonight.

Bong Bong is bijou. We were greeted by the owner Surjopriya who explained that her restaurant served food the way she cooks Bengali food today. Read: not traditional.

Kalyan’s chose a menu that included panch phoran potatoes (their version has yoghurt. I was told Bombay is mad for these but they weren’t to my taste at all), fried fish, prawn malai curry (excellent), mustard fish (strictly OK), Calcutta version of Anglo Indian pork vindaloo (I prefer the Goan version), lachha parathas and mango pudding. The vegetarian on my table was less than happy with her veggie alternatives.

Kalyan’s food walk is so much greater than the sum of its parts, and totally worth the Rs. 2,000 (£24) I paid. His stories infused so much local flavour into the menus, I met fantastic people I would have never come across otherwise, and I now know that the Malai Sandwich is as Bengali as Chicken Tikka Masala is Indian! Kalyan sent us off with bursting tummies, and a goody bag full of Calcutta snacks mukhorochok dalmut and jhalmuri.

Bong Bong was my least favourite stop of the day. Not because their food doesn’t taste good to most, but because I am old fashioned about Indian food. I have been on either side of the immigrant debate and I understand why people feel the need to modernise tradition. This is more than my memories being frozen in time – it’s about preventing a day when I won’t discover a kheer kodom because nobody remembers how to make it; about not wanting my children to grow up thinking tofu-almond butter-masala is traditional Indian food; about wanting to preserve my heritage before it disappears completely.

It’s about genuinely being worried that I can’t know where I will end up, if I don’t protect where I came from.
-p

7 responses to “Bengal in Bandra. A food walk”