I left London three months ago; in as much as I could leave a city that had become part of me over the seven years I lived there. As I began to map my two weeks back, around meals and friends I would eat them with, I realised that I have spent a lot of my life going back. Back to the same cities, back to favourite restaurants, back to old lovers. It’s never the same though.

The city doesn’t change, a favourite meal still tastes good, and old lovers are just as happy to see me – but it’s never the same. I remember London as picture perfect, sans the years of lonely meals and freezing walks in the rain. I am excited about dinner with a lover, having clearly forgotten his refusal to commit any feelings. I order cocktails in my favourite bar, and then…. reality kicks in.

The truth is that today rarely matches up to my airbrushed memory of its yesterday. And yet, I spend so much time trying to recreate perfect experiences; seldom focusing instead, on what is.

On a day when London was especially bleak, I abandoned the temptation of puncturing the memory of a comfortable old favourite with its reality. Not convinced I could revisit a place without “going back”, I chose somewhere new. I walked into Koya Bar – a cosy collection of 24 low stools arranged around an open kitchen. The noodle bar almost forces you to eat in the moment, urging you to leave your baggage at the door.

I started with Otsukemono (homemade pickles), £2.90 and a delicious Kakuni (cider braised pork belly), £6.90 washed down with a chilled Kirin, £4.60. Then I waited patiently as the chef decided on the right moment to serve me Kinoko Atsu-Atsu (mushroom with walnut miso in hot broth), £11.60. The beautiful bowl arrived with hot udon noodles that are made in the traditional manner, dough kneaded by foot. “This is such a leisurely dish,” I said to myself several times as I mixed the large lump of walnut miso into the broth. After my first slurp I was lost in the dish, coming up for air only when the last mushroom had disappeared. 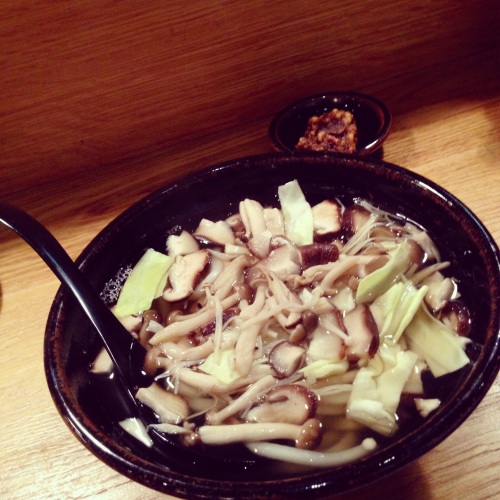 Each dish is layered with complexity, but presented with such an effortless style, that you can’t help but pay attention to what is. This spirit of is-ness comes from the kitchen and its attention to detail. The dashi would not be as fresh and their umami-rich stock would not have the power to cleanse away your worries if the chefs were somewhere else in spirit.

I left inspired. Determined to not let would-ness and was-ness from taking over the is-ness of my life.